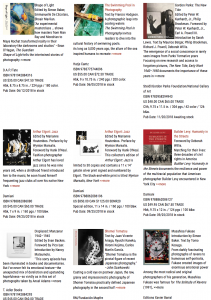 100 Years of Photography and Abstract Art

Shape of Light tells the intertwined stories of photography and abstract art from the early 20th century to the present day, looking at historic works in a variety of mediums from painting and sculpture to montage and kinetic installations. Beginning with the works of cubism and vorticism, it then highlights the key contributions of Bauhaus, constructivist and surrealist artists of the 1920s and 1930s.

From Man Ray and Alfred Stieglitz to major contemporary artists such as Barbara Kasten and Thomas Ruff, and culminating in extraordinary new work by Antony Cairns, Maya Rochat and Daisuke Yokota, Shape of Light brings to life the innovations of photographers over this period.

The Incarceration of Japanese Americans

In the weeks following the bombing of Pearl Harbor on December 7, 1941, American suspicion and distrust of its Japanese American population became widespread. The US government soon ordered all Japanese Americans (two thirds of them American citizens) living on the West Coast to report to assembly centers for eventual transfer to internment camps, openly referred to by the New York Times as “concentration camps.” Within a few months of Pearl Harbor, President Franklin D. Roosevelt signed Executive Order 9066; soon after, the War Relocation Authority (WRA) was established and by the end of March, the first of 10,000 Japanese evacuees arrived in Manzanar, an internment camp in the Owens Valley desert at the foot of the Sierras.

A follow-up to her successful 2015 book The Meadow, this project focuses on Boston-based photographer Barbara Bosworth’s (born 1953) images of the moon, sun and sky. Made over the past several years with an 8×10 camera, the star images are hour-long exposures with the camera mounted on a clock drive so that the stars are rendered as dots instead of streaks. The sun and moon images are made with a telescope attached to Bosworth’s camera. The book also includes facsimile editions of three artist’s books that Bosworth has made as a nod to Galileo’s 17th-century publications in which he first observed the skies through a telescope.

The road has been a central motif in the work of Robert Adams (born 1937) since the beginnings of his life as a photographer in the late 1960s. 27 Roads is the first publication to focus on this important aspect of his work, and is comprised of the artist’s concise, poetic selection of images spanning almost five decades. Whether fast concrete highways, quiet cuts through dark forests, paved commercial strips or dusty tracks on a clear-cut mountainside, Adams’ roads function as metaphors for solitude, connection or freedom. Adams writes, “Roads can still be beautiful. Occasionally they appear like a perfect knife slicing through a perfect apple, the better to show that two halves are one.”

This book is a facsimile of an album of Eggleston’s Polaroids assembled by the photographer himself, and containing the only photos he made in this medium. Consisting of 56 images taken with the Polaroid SX-70 (the now cult camera produced between 1972 and 1981) and hand-mounted in a black leather album also produced by the company, Polaroid SX-70 is the first publication of Eggleston’s Polaroids.

American photographer Dewey Nicks roared into the 1990s magazine world by filling his shoots with fascinating people and a vibe of boundless energy and nonstop fun. Publications such as Vogue, Harper’s Bazaar, Wand Vanity Fair kept Nicks moving seamlessly between celebrity, fashion and advertising assignments, his portfolio amassing a who’s who of iconic women, including Cindy Crawford, Natalie Portman, Sofia Coppola, Patricia Arquette, Shalom Harlow and Cher, to name only a few. Nicks recently found a forgotten box buried deep in his archive with thousands of Polaroids from his 1990s photo sessions. These one-of-a-kind favorites saved from hundreds of shoots, both private and assigned, offer an intimate portrait into Nicks’ life, friends and work. The immediacy of Polaroids combined with the natural fading of the physical print after decades in a shoebox makes each of these images singularly unique and tangibly genuine. Nicks was so smitten with this time capsule of images that he immediately shared them with his frequent collaborator, book designer and publisher Tom Adler, and this beautifully produced book was born.

Read More On Some Of The Best Photobooks Out Right Now

We're not around right now. But you can send us an email and we'll get back to you, asap.